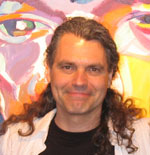 Internationally renowned artist, Philip Burke, has captured the hearts and minds of rock and roll fans, movie aficionados, sports enthusiasts, politicos, and the general public for over thirty years. Burke’s vivid colors, sparing brushstrokes, and sharp lines have set him apart from all other contemporary artists. His work has adorned the pages and covers of Time, Newsweek, Vanity Fair, The New Yorker, GQ, Vogue, Sports Illustrated, The New York Times, The New York Observer, Slate, Talk, Rolling Stone, and countless other nationally and internationally circulated publications.

Philip Burke’s collection has positioned him on the leading edge of contemporary expressionist art. Established magazines have utilized his talents to revive their image, while new publications incorporate his work to ensure a strong launch into the competitive market. His original oil paintings, ranging in size from 40 inches to 12 feet, have shown in galleries around the world, from New York to Tokyo. 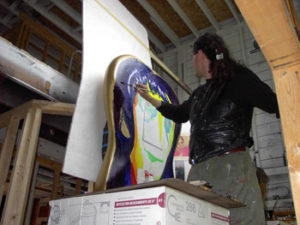 Aside from his broad popularity, Philip Burke is an artist’s artist. Respected organizations including Society of Illustrators, Society of Publication Design, and Society of Newspaper Design have repeatedly selected his artwork for shows and exhibits. Burke’s magnificent paintings were also highlighted in several books, including, most notably, “The Savage Mirror” in 1993 and “Rolling Stone – The Illustrated Portraits” in 2000. The art world’s respect and adoration for Burke was validated when the legendary Andy Warhol sat for a portrait painting by Philip, a rare and thrilling experience.

Burke’s subject matters run the gamut of celebrity personnel, relevant headliners, current political and social events, business leaders, elite athletes, and more. However, his highest energy and vibrancy seem to converge on his rock and roll and political paintings and drawings.